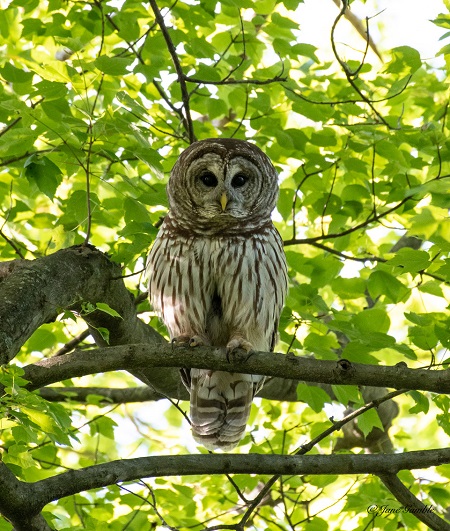 An adult barred owl near the Haul Road trail. Photo by Jane Gamble

Spring’s rebirth is always uplifting, especially when Dyke Marsh’s avian heroes and heroines put on a show.  In May 2021, many people delighted in observing a barred owl pair (Strix varia) and their three young near the Haul Road trail.

Josh Brick shared a video of the two adults appearing to display affection or preening.  “It was hard to pull ourselves away,” Josh reported. 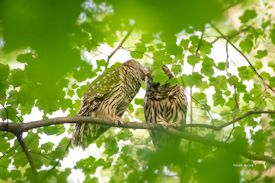 Barred owls live in mixed forests with large trees and often near water.  They are highly adaptable to varied habitats, including mixed forests and disturbed areas. “Barred owls are the opportunists of the owl world,” wrote Leigh Clavez in The Hidden Lives of Owls. They usually nest in a natural cavity 20 to 40 feet high in a large tree and the owlets start flying around six weeks of age.

Many fans snapped photos. Here we share some from Jane Gamble and Ed Eder and Josh Brick’s video.